It is always a pleasure and gives us a great sense of pride when we hear about the professional advances our students have made. We recently asked Susie some questions to let us know a little more about her success:

Q: What inspired you to want to get into voiceovers?

A:  I was a big fan as a kid of programs like You Are There, Victory at Sea, etc. I loved Alexander Scourby’s voice and thought he had the very best job in the world. When I started college at the University of Michigan in 1968, I planned on studying theatre and I wanted to learn how to be a voiceover talent—but the times being what they were, I was actively discouraged by my advisors. “Now, dearie, that’s a MAN’s job and a UNION job and your eventual husband won’t want you to travel that much.” My own feminism hadn’t blossomed yet so I meekly accepted their opinions as truth. Many years later (like about five years ago), I was chatting with a friend who is a very experienced sound engineer with a theatrical background like mine. I said I’d always wanted to record and that I loved audiobooks. Next thing I knew, he and I were recording public domain material and trying to market it on CDs. Not so successfully, I fear—too many costs, too many CDs rolling around, but we got a nibble from a company that was licensing such works online and we started selling our works through this site. Then Audible.com came along and, whoopee! We were audiobook artists, but I still had the voiceover bug.

Q: Who was your instructor at Such A Voice & what about that person made them a good fit for you?

A: Nick Kaiser was my instructor and we hit it off immediately! We had a lot of common experiences, being of the same generation and our personalities just meshed. Nick told me that my theatrical background meant that I already had a head start on a lot of voiceover hopefuls and encouraged me—for the first time in my life!!—to release my inner ham and have fun with VO. He also was a strong force against the old voices from my past and kept gently urging me on, letting me know I could do this and finally live my dream. He’s my best cheerleader!

Q: What do you see as your own VO strengths and why you will continue to succeed at this?

A: I love, love, love narration and will continue to seek out audiobook opportunities. I’ve got a million accents and characters in my repertoire, all just waiting to bust out. I’ve also learned that I enjoy commercial work—my first VO job, which kind of walked into my office while I was still getting coaching from Nick, was a website promo for a machine vision company so I got my feet wet early. Since then, I’ve done audio for some physical therapy videos produced by a young friend and have a monthly gig with an English as a Second Language testing company. All of this was just from personal contact and a little bit of networking. Then I landed my first job through Voice 123, using only my narration demo. It’s the first one that came my way through an audition, using the wonderful demos produced by Tom Force (the Michigan radio maestro) and Marshall Block (a great engineer with a rock and roll history that is nothing short of incredible). The client is in Montpellier, France.

Q: What did you take away from Such A Voice that will be the most beneficial to your career?

A: Confidence, confidence, confidence. I always thought I had a good voice but Nick, Tom and Marshall told me I had a GREAT voice so I’m feeling that there’s nothing in the VO area I can’t try. I’m not as swift with recording myself but I’m trying hard and I have some wonderful friends who are helping me. I learned that there are people who love to help you achieve whatever you dream of and I’d like to pass that along to other people like me.

Q: What advice would you give to aspiring voice talent?

A: My best advice is don’t let anybody tell you that you can’t do it! If you’ve got a voice, get good training (there’s this company called Such A Voice that I can’t say enough good things about!) and practice, practice, practice. Do community theatre. Record yourself. Just get out there and do it and don’t waste a huge portion of your life letting someone else’s outmoded ideas hold you back!!

Congratulations Susie, we are thrilled that you shared this experience with us!

Lisa Foster, Producer and Talent Coach since 2007 with Such A Voice, has launched a successful podcast show with her former radio partner.

“Peculiar Podcast” started over dinner when she and her former radio partner started playing around with the idea of starting a podcast. Knowing that their schedules did not permit launching a new radio show, Lisa Foster and Pat Cashman decided that the idea of launching a podcast instead was ideal.

Lisa Foster tells us, “We really knew next to nothing about podcasting, but deciding to jump in anyway. Since the medium was so under-utilized and not something embraced by the common user, we knew that we weren’t jumping into a very crowded pool, so the chances of us hitting our heads on a rock were pretty slim. Even though we didn’t know really how to swim in these new broadcasting waters, we decided to risk it. “

Podcasts have only been around since the early/mid 2000’s, and while everyone knows what the radio and TV media is, over half of the population is not familiar with podcasting. Podcasting is strictly an internet medium, meaning, if you don’t have access to a computer, you cannot listen to podcasts…

Fans of their radio show were delighted to know that they were “on the air” again, but it has still been a struggle explaining to new listeners HOW to listen. They are still going through the infancy phase of the podcast – but since there are no rules, they are free to try out new ideas. “As podcasting starts to slowly climb onto the same playing field as radio and TV, we hope we can sustain a solid listenership. For now, monetizing these shows is still an experiment; we basically are doing it for ourselves and our fans at this point.”, says Lisa. 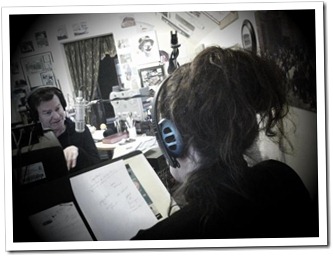 Most of the podcast is unscripted, although some of the supporting material is added in post production. The challenging part of putting the podcast together wasn’t content, but understanding the technology behind it. “Since podcasting is internet-based, it was an area that took a lot of research to determine how to get the product to the consumer. RSS feeds, iTunes approval and subscriptions, FTP uploads and the like had to all fit together before listeners could even HEAR the show…”

Lisa Foster’s advice to start a podcast is to focus on content first. Get a few shows done, script them if you need to, and then learn the technology that brings them to your listener. There’s more to launching a podcast than just talking into a microphone.

If you would like to listen to Peculiar Podcast, check out the site here: www.PeculiarPodcast.com.

An Interview with Anne-Marie Meeks

" …that was the best $150 I have ever earned for a 3 minute job done in the comfort of my own home in my studio that my husband had built." –Anne-Marie Meeks, Professional Voice Over Actor, on her first job after completing the Such A Voice program

Anne-Marie partially grew up in Nigeria, with her mother insisting that the children not speak the local lingo. So, she took to watching VHS videos of old movie classics like "My Fair Lady" and learning to mimic "proper English". Soon her family members couldn’t believe how similar she had made her voice sound to the movies and commercials she was listening to. After that a family member, who worked as a TV producer, cast Anne-Marie in her first gig in the 80’s doing a commercial for Star toilet paper. The older she grew, the more drawn into the VO industry she became. The deal was sealed when a classmate did his Engineering thesis on VOIP (Voice-Over-Internet Protocol) and needed a voice to demonstrate his product. He later sold the product with HER voice, and the rest has all been leading up to this point!

Anne-Marie worked with Anne Ganguzza in Dallas, Texas and there was an instant connection. "I loved Anne, she made me feel welcome and relaxed. I felt that we bonded. We first started out with VO in IVR‘s". From there she recorded her demo with Anne, and the first job didn’t take too long to arrive thereafter. "I had done the recording in my pajamas and fluffy slippers, sent it to the client and was really anxious. Within a minute, PayPal alerted me to payment and the client called to say he was pleased. I was so excited. VO Life is sweet!"

Anne-Marie’s advice for people venturing into the world of Voice Overs? "Always be open to constructive criticism, find your niche, everyone’s voice is unique and there is a unique job out there just for you… try your best and STICK WITH IT."

Congratulations Anne-Marie, we can’t wait to hear more of your successes!